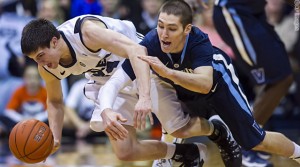 INDIANAPOLIS – If every meeting between new Big East foes Villanova and Butler is like the first, basketball fans are in for some treat.

Villanova outlasted Butler in a back-and-forth game at Hinkle Fieldhouse, snatching a 76-73 victory in overtime in the conference opener for both teams.

JayVaughn Pinkston led the Wildcats with 22 points. Kellen Dunham matched that total for the Bulldogs, including a game-tying jumper late in the second half that forced overtime.

(The teams trade baskets in the middle of the first half)

(The final call as Villanova wins it)