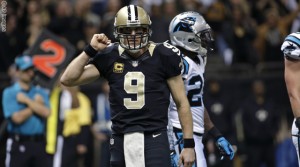 NEW ORLEANS – Drew Brees threw four touchdown passes as the New Orleans Saints took the lead in the NFC South with a 31-13 victory over Carolina on Sunday night at the Superdome.

Brees was 30 of 42 for 313 yards and completed two touchdowns apiece to Marques Colston and Jimmy Graham.

With the win, New Orleans improved to 10-3. Carolina dropped a game behind in the divisional race with the loss. The Panthers sit at 9-4 with a rematch between the teams coming up in two weeks in Charlotte.