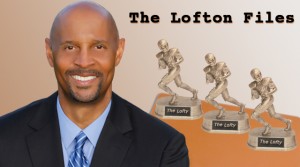 “I’m Sally O’Malley and I’m proud to say I’m 50!” Those are the words of Molly Shannon’s Saturday Night Live character in her tight red jump suit and bouffant hairdo, kicking and stretching and kicking. Kind of reminds me of Peyton Manning shuffling up in the pocket.

And with that… it’s time for the season-ending Loftys for those who have gone above and beyond the call of duty.

Player of the Year, MVP, the Greatest of All Time: Peyton Manning

At age 37, and with enough hits and surgeries under his belt to seem like he’s 50, Manning has gone above and beyond what we (I) thought was possible for a player his age to do and that’s improve. Yes, Peyton is getting better with age. Maybe it’s the rarefied Mile High air, or all that pizza he’s eating. 51 touchdown passes with a game to go? Are you kidding me? That’s not to say he’s been flawless, but boy has he come close. Has he been pass happy? 682 attempts! So what!! Before the Bears-Eagles 54-11 mismatch this past Sunday night there was a spirited debate between two media heads (I sat and listened with my back to them) about where Peyton ranked as an all-timer. Let me just say for the record and proudly so… he’s not even 50 and he’s getting better!

Three non-first rounders share the award for going above and beyond their draft positions.

Defensive Player and Talker of the Year: Richard Sherman

They say it’s only trash if you can’t back it up. The Legion of Boom is solid to about six deep in the secondary, but none personifies that Seattle Swagger better than Richard Sherman. Sherman has been building his rep – and his Twitter account – at the expense of opposing quarterbacks that dare throw in his direction. Eight picks for a guy QBs try to avoid is quite the statement. Wonder how I would have faired against my fellow Stanford alum in my prime?

Coach of the Year: Andy Reid

I considered Riverboat Ron Rivera in Carolina. Last year’s winner, Bruce Arians, in his new home in Arizona was in consideration. But the big fella, Andy Reid, gets my nod. Even if the Chiefs did have a boatload of talent, they went 2-14 a year ago, proving it takes the right chef to get the sauce right. The Chiefs aren’t perfect, but Reid knows how to set the table – in years past, cheesesteaks were on the menu. This year, it’s barbeque and burnt ends.

Stadium of the Year: Candlestick Park

Sorry Seattle. I know you’re loud, but you’ll have to take a backseat to old Candlestick Park. Bill Walsh, Joe Montana, Ronnie Lott and Jerry Rice started the tradition and the current crew are also making memories that will last a few lifetimes. The 49ers will move into a new $1.2 billion home next fall, but The Catch (Dwight Clark), the Catch II (T.O.) and the Catch III (Vernon Davis) will live on. It was a mucky mess when wet, but the old infield was just as often rock hard as baseball season gave way to football season. The slick Astroturf was no kinder before that. The ‘Stick was a baseball stadium with a football field dropped in. It was where Mike Singletary had his rant. Oh, and the titles – FIVE Super Bowl wins! Brodie, Montana, Young and now Kaepernick. Close your eyes and you may feel the earth actually shake under your feet. The ‘Stick truly went above and beyond.

That’s the Loftys for 2013. I knew you were curious about the other presents under the tree! Hit me up on Twitter with a few Lofty winners of your own and have a blessed Holiday season!

James Lofton is the analyst for WestwoodOne’s coverage of Sunday Night Football. This week, Kevin Kugler and James will be in Dallas as the Cowboys take on the Philadelphia Eagles for the NFC East title and a berth in the playoffs. Coverage begins at 7:30 PM Eastern.