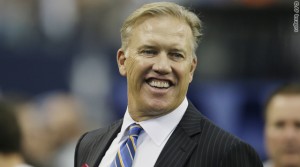 It’s hard to believe, but it was just two years ago this month when the winning quarterback under center for the Denver Broncos in a playoff game was Tim Tebow.

A whole lot has changed in the Mile High City since then, all beginning when Broncos executive vice president John Elway convinced Peyton Manning to sign with Denver.

After defeating San Diego last weekend, and after one of the greatest regular season in quarterbacking history, Manning leads the Broncos into an AFC Championship Game showdown with Tom Brady and the New England Patriots.

Ahead of the game, our Scott Graham had a chance to talk to Elway about signing Manning, the successful resurgence of the franchise in the past several years and much, much more.

Kevin Harlan, Dan Fouts and sideline reporter Tim Ryan will have all the action live from Denver as the Broncos host the New England Patriots. Coverage begins at 2 PM Eastern on WestwoodOne Sports.