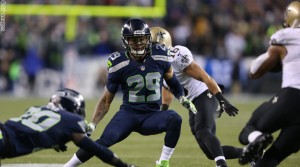 The last time the Saints and Seahawks faced off at CenturyLink Field the results were anything but kind to Drew Brees and his bayou crew.

Seattle crushed New Orleans in an early-December Monday Night Football matchup. Since then, however, Seattle is 2-2 with a pair of wins being just enough to secure the top seed in the NFC and home-field advantage throughout the playoffs.

New Orleans was also 2-2 down the stretch and ended up with a Wild Card spot – but they went on the road last weekend and beat Philadelphia to advance this far and get the whole “can’t win on the road” monkey off their backs.

Ahead of the game on Sunday, our Scott Graham had a chance to talk to one of the guys who will be tasked with slowing down Brees and the Saints offense – Seattle safety Earl Thomas.

Seattle-New Orleans begins our Saturday Divisional doubleheader. Coverage from CenturyLink Field begins at 4 PM Eastern. At the conclusion of that game, we’ll head all the way across the country to Foxboro for the Patriots and the Colts.