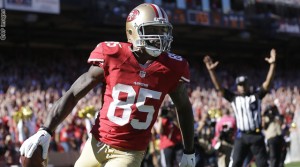 If it wasn’t for Vernon Davis’ big catch just before halftime last weekend in Carolina, we might be building up to an NFC Championship Game between the Panthers and the Seattle Seahawks.

But Davis did make the grab, and managed to get both feet in bounds, which flipped the momentum in the game. After that, the 49ers never looked back as San Francisco earned to a third straight trip to the conference title game.

Ahead of the big showdown with the Seahawks, our Scott Graham had a chance to talk to Davis about the catch and the unique atmosphere they’ll face at CenturyLink Field with a spot in Super Bowl XLVIII on the line.

Kevin Kugler, James Lofton and sideline reporter Mark Malone will have all the action from Seattle on Sunday afternoon. Coverage begins at approximately 6:15 PM Eastern, immediately following our broadcast of the AFC Championship Game from Denver, which begins at 2 PM Eastern.