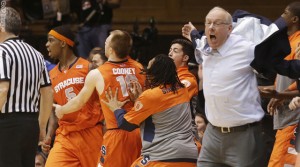 DURHAM, NC – If the first ACC meeting a month ago between Duke and Syracuse that ended in an overtime thriller didn’t ensure this will be a huge rivalry for years to come, Saturday night’s contest at Cameron Indoor Stadium sure did.

The Blue Devils outlasted the Orange 66-60 after Syracuse head coach Jim Boeheim was ejected for vehemently arguing a charge call on C.J. Fair. Fair made the layup, which would’ve tied the game late in regulation.

Boeheim stormed onto the court and immediately received a pair of technical fouls and was tossed from the game. Duke made three of the four ensuing foul shots to put the game away.

(C.J. Fair is called for a charge and Boeheim is ejected)