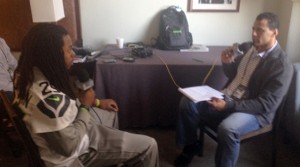 Few players have made as many headlines as Richard Sherman in the lead-up to Super Bowl XLVIII following his huge play to end the NFC Championship and his subsequent comments on and off the field in the immediate aftermath.

At this point, however, Sherman has said his apologies and all that will matter will be his play today’s Super Bowl as he and his teammates try to slow down Peyton Manning and the Broncos.

Ahead of the game, our Rod Woodson spoke to the Seahawks corner.