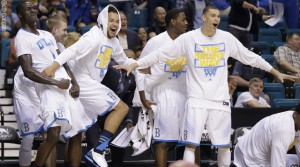 LAS VEGAS – UCLA raced to a huge lead and never looked back in a 84-59 victory over Stanford to earn a spot in Saturday’s Pac-12 final.

Norman Powell led the Bruins with 22 points in just 23 minutes. UCLA led 24-5 before the game was even eight minutes old. After Stanford cut the lead to 13 points on the first possession of the second half, UCLA embarked on a 12-0 run which essentially ended the game as a contest. The Bruins were able to empty the bench with 14 different players seeing action.

(Wear dunks one home and UCLA leads by 27)