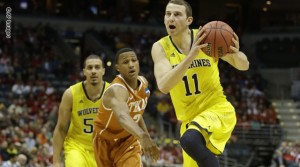 MILWAUKEE – Balanced scoring and 14 3-point baskets helped the No. 2-seed Michigan Wolverines get past No. 7 Texas, 79-65, in NCAA third-round action Saturday at the BMO Harris Bradley Center.

(Derrick Walton gets into the 3-point act with his second of the half. Michigan leads 51-35.)

(Michigan 79, Texas 65. Sixteen is sweet again for the Wolverines!)