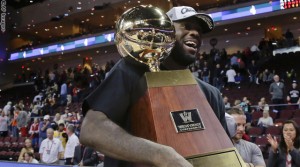 LAS VEGAS – Gonzaga led from start to finish in capturing its second straight West Coast Conference Tournament championship and 12th in the last 16 years with a 75-64 win over BYU on Tuesday night.

Tyler Haws led all scorers with 24 for the Cougars in defeat.

(The final call as the Zags win another WCC championship)