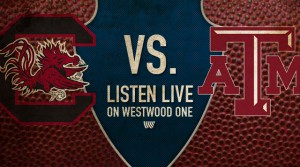 Westwood One’s coverage of college football begins with an SEC matchup from Columbia as the Gamecocks of South Carolina host the Texas A&M Aggies. Coverage begins at 5:30 PM Eastern on Westwood One and streaming right here at WestwoodOneSports.com.

For a preview of the game, we turn to our analyst Chris Doering.

The Aggies enter their first SEC season without Johnny Manziel at the helm and Kevin Sumlin has chosen to go with sophomore Kenny Hill to fill the void. As difficult a task as this sounds, Sumlin has had a quarterback throw for at least 3,500 yards in five of his six seasons as a college head coach so I expect the offense to still rack up yards and put up points this year. A&M has a veteran offensive line, returning four of five starters from last year, along with a trio of talented running backs to help take some of the load off of Hill’s shoulders.

Defensively the Aggies were a mess last year, giving up 475 yards per game and ranking 110th in the country against the run. Part of the reason for this was the small defensive front, both in size and numbers.  This year the group goes about 12 deep with many of these players adding bulk in an effort to hold up against SEC offensive lines. Look for the linebacker play to be improved as well behind the leadership of senior Donnie Baggs, who moves back outside thanks to the emergence of Jordan Mastrogiovanni at the mike linebacker spot.

Senior CB Deshazor Everett promises the secondary will be improved this year “because they can’t get any worse than they were last year.” If that is the case, true freshman safety Armani Watts and redshirt freshman cornerback Victor Davis are going to have to grow up quickly.

The Gamecocks enter 2014 coming off back-to-back-back 11-win seasons and expectations are high despite losing QB Connor Shaw to graduation. Fifth-year QB Dylan Thompson has played meaningful downs in relief of Shaw but now takes the reigns of coach Steve Spurrier’s offense, which has become much more ground ‘n pound than the old Florida fun ‘n gun. Look for Carolina to continue running the ball with success as junior RB Mike Davis leads a strong stable of running backs into 2014. The offensive line, like A&M’s, is littered with returning starters and many people feel like this could be the best o-line in the history of the program. With success running the football, the Gamecocks should have plenty of room to throw to WRs Damiere Byrd and Pharoh Cooper.

On the other side of the ball, the Gamecocks must find a way to replace three of their four starting D-lineman from 2013, including superstar Jadeveon Clowney and all-American Kelcy Quarels. Carolina will also be very young in the secondary after losing both corners from last year. These losses have forced senior Brison Williams to move from safety to corner, where he will start along with true freshman Al Harris, Jr. The strength of the Gamecock D should be the linebacker corps led by sophomore Skai Moore. Moore led the team in tackles and interceptions as a freshman last season.

The Aggies Win If…

They are able to dominate the offensive line of scrimmage. Carolina’s front seven is undersized, especially at linebacker where Moore is listed at 215 pounds and spur (hybrid LB/SS) Sharrod Golightly is aptly named at just 185 pounds. With any kind of push upfront, RBs Tra Cason, Brandon Williams and Trey Williams could have a big day.

The Gamecocks Win If…

They take advantage of the young and vulnerable secondary of the Aggies. QB Dylan Thompson has waited for four years to have this opportunity and fits the traditional mold of Spurrier quarterbacks much better than Shaw did. Thompson should have excellent protection, which could mean big plays in the passing game for Carolina’s wide receivers, tight ends and running backs. A&M’s secondary has a history of looking into the backfield a bit too much and could be ripe for some double moves and wheel routes from the Gamecocks.

I will be keeping an eye on the game in Athens between Clemson and Georgia. The Dawgs are up in two weeks for Carolina in an early-season divisional game that could put the winner in the driver’s seat in the SEC East. QB Hutson Mason replaces Aaron Murray, but Mark Richt is adamant the offense will not change a bit.  This game against Clemson should tell us more about that and if the Bulldogs can be a player in the national championship picture this year.

John Sadak and Chris Doering will have the call from Columbia beginning at 5:30 PM ET tonight. You can listen right here on WestwoodOneSports.com!