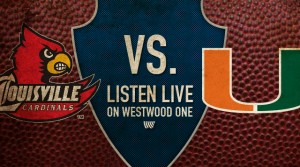 Westwood One’s coverage of college football continues Monday night from Louisville as the Cardinals host the Miami Hurricanes. Coverage begins at 7:30 PM Eastern on Westwood One and streaming right here at WestwoodOneSports.com.

It’s a game of firsts for the Cardinals, but also a case of deja vu. Louisville opens the season with its first game as a member of the ACC, but does so against the team it played its last game against a year ago. The Cardinals won that contest over Miami 36-9 in the Russell Athletic Bowl in Orlando. Much has changed since that December day, with Charlie Strong leaving for Texas and Bobby Petrino returning to the Bluegrass State. Petrino left after the 2006 season for a short stint with the Atlanta Falcons, before he moved on to Arkansas. His time with the Razorbacks ended in controversial fashion and his return to Louisville was met with mixed reaction from the Cardinals faithful. You can’t argue with Petrino’s results at Louisville, however. His 41-9 record from 2003-06 marked the best four-year stretch in the history of the program. Between the lines, sophomore quarterback Will Gardner won the starting job and will need to pick up where current Minnesota Viking Teddy Bridgewater left off.

The Hurricanes had a long and winding road to find their own starting quarterback after Ryan Williams tore his ACL during the off-season. In the end, true freshman Brad Kaaya beat out graduate student Jake Heaps and will become the first frosh to start under center for the ‘Canes since Jacory Harris in 2008. Kaaya won’t turn 19 until Wednesday, but comes in with a solid high school pedigree. An All-American at Chaminade College Prep, Kaaya threw for a school-record 3,855 yards and led his team to a state championship in his senior year. A player to be aware of is wide receiver Stacy Coley, who was the only FBS player last season to score a rushing, receiving, kick return and punt return touchdown. Coley averaged nearly 18 yards per catch a year ago and is clearly a threat in several different areas.

Scott Graham and Kelly Stouffer will have the call from Louisville beginning at 7:30 PM ET tonight. You can listen right here on WestwoodOneSports.com!