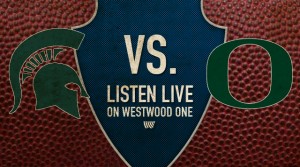 Westwood One’s coverage of college football continues from Eugene as the Oregon Ducks host the Michigan State Spartans. Coverage begins at 6:00 PM Eastern on Westwood One and streaming right here at WestwoodOneSports.com.

The Spartans come into this Week 2 non-conference matchup with a COMPLETELY different mindset than they would’ve had at this same time last year. After week one of the 2013 season, neither the quarterback nor running back positions had been solidified and MSU was struggling to get past Western Michigan and South Florida through two games. Fast forward one year later, now their quarterback (Connor Cook) is on the watch list for the Davey O’Brien Award and four other major post-season awards, their running back (Jeremy Langford) is a Doak Walker candidate and the Spartans are all wearing bright and shiny Rose Bowl Championship rings! Cook has all of his skill position players back from last year’s squad, aside from Bennie Fowler, and is coming off a near-perfect performance in the Spartans victory last weekend over Jacksonville St. (12-of-13, 285 yards, 3 TDs, 0 INTs). Defensively, the Spartans lost six starters from last year’s team, including first-round NFL draft pick CB Darqueze Dennard, but they’ve been extremely deep on defense over the last few years and have one of the best defensive coordinators in college football in Pat Narduzzi.

The moment QB Marcus Mariota decided to come back for another year in Eugene, the Ducks immediately became College Football Playoff contenders. They lose a few talented offensive threats from last year, including NFL draft picks Josh Huff and DeAnthony Thomas, as well as returning WR Bralon Addison, who went down with an injury in the spring. But Oregon has been recruiting as well as any other top program in the country and I would rank their top three running backs of Thomas Tyner, Byron Marshall and Royce Freeman alongside any trio in college football. 2014 marks a change in play-calling duties on the defensive side of the ball as longtime Ducks assistant Don Pellum (22nd year on staff) takes over for the retired defensive coordinator Nick Aliotti.

The Spartans pull off the upset if…

Two things happen. Field position will be paramount to Michigan State’s success. That means getting first downs on offense to keep drives alive and understanding that if they can’t get points, a punt that pins the Oregon offense deep in its own territory can be a biggest weapon. Make the Ducks travel a long field. Number two, fundamentals of tackling for the Spartan defense will be so important. If they miss tackles on Oregon’s skill-position players, they’ll give up big plays as well as the touchdown scoring drives that last less than two minutes. MSU cannot afford to miss tackles and expect to slow down this high-powered offense.

The Ducks defend their home turf if…

They ignore the fact that this Michigan State team is eerily similar to Stanford, which has suffocated this Oregon offense over the past two years. Stanford, like MSU, features a physical, smash-mouth style defense and has limited the Ducks to 7-for-27 (26%) on 3rd down and allowed just one rushing touchdown to Oregon in the past two games. But as long as Oregon can continue to run the football effectively with Tyner, Marshall and Freeman, they won’t have to rely on their passing game. That would bode well as the Ducks don’t boast a returning pass catcher who had more than 20 receptions last season.

Speaking of Stanford, there’s a pretty interesting matchup in Palo Alto going down this weekend pairing a couple of Top 25 teams in the Cardinal and the USC Trojans. Both teams notched convincing opening-week victories and this game will show me a TON about the Stanford program. They lost their defensive coordinator Derek Mason and LBs coach David Kotulski to Vanderbilt along with six NFL draft picks, three of those on defense and the ever-so-important LB Shayne Skov. If Stanford wins, especially if it’s in convincing fashion, it will validate in my eyes that Stanford simply reloads and is truly one of the premier college football programs in the country.

You can also see Derek as a contributor to 120Sports. Check him out on 120Sports.com. John Sadak and Derek will have the call from Eugene beginning at 6:00 PM ET tonight. You can listen right here on WestwoodOneSports.com!