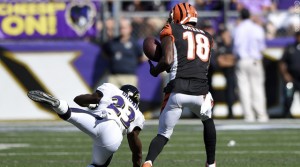 The Ravens had taken their first lead of the game just moments earlier on Joe Flacco’s 80-yard touchdown toss to new teammate Steve Smith, but Cincinnati rallied right back less than a minute later.

The Bengals led 15-0 at the break courtesy of five Mike Nugent field goals, but 16-unanswered points had given the Ravens the edge before Dalton and Green’s heroics.

Kevin Lee and Mark Malone called the action on Westwood One Sports.

(Andy Dalton hits A.J. Green and Cincinnati goes back ahead)