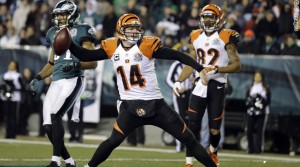 Andy Dalton and the unbeaten Cincinnati Bengals head to New England on Sunday night for a big test of their early-season credentials.

Of course, the Patriots are coming off one of the biggest losses in the Belichick-Brady era after getting waxed by Kansas City on Monday night.

Ahead of the game, our Scott Graham had a chance to talk to the starting quarterback of the Bengals.

Kevin Kugler, James Lofton and Anthony Becht will have all the action from Foxboro on Sunday night as the Patriots host the Bengals. Coverage begins with NFL Sunday hosted by Scott Graham at 7:30 PM Eastern.