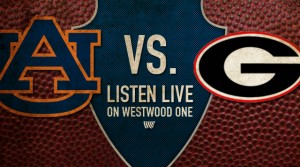 The Tigers are coming off a tough loss at home to Kevin Sumlin’s resurgent Texas A&M squad last weekend, the first loss at Jordan-Hare since Gus Malzahn took over as head coach. Watching that game back on tape, I thought Auburn was sluggish coming out of the gate, took a few chances in coverage where they got beat and committed a few critical errors they weren’t able to overcome—namely a blocked FG for a TD to end the first half and a couple of late fumbles. But it’s a new week and one thing I know for sure, RB Cameron Artis-Payne is not getting enough recognition nationally for what he’s brought to this offense. Coming into 2014, the thought was a group effort was needed to replace the production of the departed Tre Mason to the NFL. However, the Tigers haven’t needed a group effort; Artis-Payne has brought a comparable level of production on the ground as the current SEC leader in rushing yards. But it’s the Auburn defense who will be tested the most as Georgia welcomes back the man-child Todd Gurley to the lineup to go along with one of the best freshmen in the country in Nick Chubb. Chubb has 140 rushing yards or more in each the past four games. I fully expect both teams to rush for 200+ yards in this game as both Auburn and Georgia have been just average in stopping the run on defense this year.

After a shocking loss to the struggling Florida Gators in Jacksonville a couple weeks ago, Georgia responded in dominating fashion last week beating up on Kentucky on the road. Quarterback Hutson Mason threw more TD passes against the Wildcats (4) than he did incompletions (3) and Chubb finished with another 170 yards on the ground. Chubb now has 671 rushing over the past four games, an average of nearly 168 per contest during that stretch. I’m so curious to see how the running back rotation will shake out, even though head coach Mark Richt made no bones about it that Gurley would be his starter. By some time in the late 2nd or early 3rd quarter, we’ll see how hard Gurley has been conditioning since being suspended by the NCAA and we’ll see if Chubb sees 15+ carries because he’s definitely earned that over the past month. Even though the Dawgs blew out Kentucky last week, I still saw too many breakdowns in the Georgia defense giving up explosive plays, which you cannot afford to do against Auburn. This is not the most flashy prediction, but I truly think the team that tackles the best on defense will be victorious. Between Artis-Payne, Gurley and Chubb, all three are very strong runners, tough to bring down in the open field and they all have the ability to turn 5- or 6-yard runs into 30- or 40-yard gainers.

Another *slightly* important SEC game with implications for the CFP will go down in Tuscaloosa between #1 Mississippi St. and #4 Alabama. The winner will have the inside track to represent the West in the SEC Championship game and I would be willing to bet that one of these teams will be present in the first College Football Playoff. And speaking of running the football, I wouldn’t be surprised if both of these teams approach, if not surpass, the same 200+ rushing yards I predicted for Auburn/Georgia. But the Bulldogs of Mississippi St. will have to have a plan for Amari Cooper because he’s roasted two different SEC teams for north of 200 yards receiving. He has climbed up the NFL draft boards and almost certainly will be a first-rounder this spring.

I might as well stick with the same theme and look at another game that will feature Heisman trophy candidate running backs. Nebraska’s Ameer Abdullah and his 1,250 rushing yards will travel to Madison to take on the Wisconsin Badgers and Melvin Gordon, who has 1,501 rushing yards on the season. This game will help clarify a front-runner in the Big Ten West as we progress through November. You’ll also need to keep an eye on Minneapolis for that race as well, as another top-25 matchup features Minnesota, tied with Nebraska and Wisconsin atop the Big Ten West at 4-1, hosting Ohio State. I smell another exciting college football Saturday upon us!

Jason Benetti and Derek Rackley will have the call from Athens beginning at 6:45 PM ET. You can listen right here on WestwoodOneSports.com!