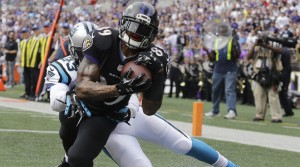 It might be his first season as a Baltimore Raven, but Steve Smith already got a taste for the rivalry with the Pittsburgh Steelers.

Smith had six catches for 71 yards as the Ravens beat the Steelers on Thursday night in Week 2 in a game that was somewhat overshadowed by everything that was going on with Ray Rice at the time.

Ahead of the latest installment in the series between the AFC North foes, our Scott Graham had a chance to talk with Smith.

Kevin Kugler, James Lofton and Scott Kaplan will have all the action from Pittsburgh tonight as the Baltimore Ravens visit the Pittsburgh Steelers. Coverage begins with Scott Graham on NFL Sunday at 7:30 PM Eastern.