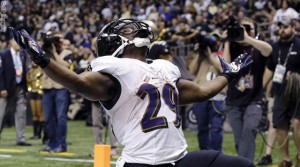 NEW ORLEANS, LA – Justin Forsett had a career night with 182 yards rushing and a pair of touchdowns as the Baltimore Ravens kept pace in the crowded AFC North with a 34-27 win over the New Orleans Saints on Monday night.

Joe Flacco was an efficient 18 of 24 for 243 yards and a touchdown in the victory, which improved Baltimore to 7-4 on the year. Pittsburgh and Cleveland each have the same record and Cincinnati is a half-game better at 7-3-1 through 11 games.

The Saints, meanwhile, remain in a tie for first place in the NFC South with Atlanta at 4-7.

Kevin Harlan and Dan Fouts called the action on Westwood One.

(Brees and Graham connect again to get the Saints closer)