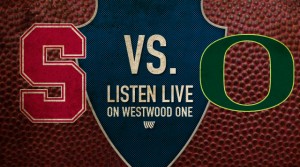 For a preview of the game, we turn to our analyst Chris Doering.

After a disappointing home loss to Arizona four weeks ago I was ready to write Oregon off as a College Football Playoff participant. But since that loss, the Ducks have regrouped nicely and now find themselves on the cusp of being included in the initial rankings that were released on Tuesday.

The reason they now have renewed hope despite being one of 17 one-loss teams ranked in the polls is partly because of the return of LT Jake Fisher. Fisher missed two games with an injury including the 31-24 loss to Arizona. While offensive line play is about five individuals playing in-sync as one unit, the numbers with Fisher in the line-up versus those without him are staggering. Oregon was 3-0 during the first three games with Fisher anchoring the O-line and the offense averaged 52 points with Marcus Mariota being sacked only four times. With Fisher on the sideline with his leg injury, the team went 1-1 and the offense averaged only 31 points with Mariota going down 12 times. Fast forward to the UCLA game with Fisher back in the game, the offense was back to its high-scoring ways, putting up 42 points and allowing Mariota to account for four TDs while keeping his uniform clean and avoiding being sacked all day.

I know there is a lot of football still to played and things usually sort themselves out down the stretch, but let’s imagine Oregon is one of several one-loss teams vying for inclusion into the Playoff. There are several tiebreakers the committee will use to decide between evenly matched teams that could potentially favor the Ducks. Selecting conference champions is high on the priority list and despite losing to Arizona, Oregon sits atop the Pac-12 North division and would most likely be favored to win against any opponent from the South should they reach the championship game. If the committee has to decide between the Pac-12 champion Ducks and the Big Ten champion Michigan State Spartans that tiebreaker would fall Oregon’s way due to the 46-27 September victory over Sparty. The final criteria that the committee is able to consider takes us right back to the beginning, key injuries that may have affected a team’s performance during the season. It is easy to see the value of Jake Fisher in the lineup. For UO’s sake, hopefully he can stay injury-free the rest of the way.

Stanford has been the model of inconsistency over the last five games alternating wins and losses over that period as their season record has dipped to 5-3. Head coach David Shaw has shown some flexibility, however, moving away from his power running game preference in favor of a spread-it-out, uptempo attack that the Cardinal went to in their 38-14 win over Oregon State last week. Shaw noted that his coaching staff would do whatever they needed to do to fit the strengths of their personnel and to put their players in the best position to be successful.

My problem with this is that the reason Stanford has had so much success against Oregon the last two years is, because their offense is so different from the typical Pac-12 style, it presents a different, more physical challenge that the Duck defense doesn’t handle all that well. By moving to the spread attack the Cardinal will not be able to control the ball and frustrate the Duck offense by keeping them on the sideline for long periods of time. This can also hurt the Cardinal defense, who will need all the time they can get to recover from the speed and pace of the Oregon offense. It will be interesting how Shaw tries to find balance with his offensive game plan.

Looking Ahead- If Oregon wins:

With a Ducks’ victory on Saturday they will find themselves with a two-game lead in the Pac-12 North and the tiebreaker with head-to-head victories over Stanford and Oregon. But, things do not get much easier for UO as they have to travel to Salt Lake to take on a Utah team that has wins over UCLA and USC in the last three games they have played. You would think the Ducks would be able to cruise through their last two games of the season at home against Colorado and on the road at Oregon State, so the importance of a win over Stanford is only magnified given their potential position in the division as well as nationally.

Looking Ahead- If Stanford wins:

Should the Cardinal pull the upset at Autzen Stadium on Saturday they will share a 4-2 conference record and hold the head-to-head tiebreaker with their victory over UO. The interesting thing is that Stanford’s next opponent is also Utah as they get a bye next week before welcoming the Utes to Palo Alto the following week. The Cardinal will root hard for the Utes during the bye week to give them some margin for error given the difficulty of their run down the stretch that includes games against Utah and UCLA. Despite a disappointing start to the season, the Cardinal still control their destiny within their division but that is out the window with a loss to Oregon on Saturday.

While the Oregon players will certainly have all of their attention devoted to Stanford on Saturday, you can bet that more than one Duck fan will be peeking in on what is happening in Oxford, Mississippi on Saturday. Auburn and Ole Miss find themselves in a de facto playoff game with the loser exiting the top four in the rankings, opening up a slot for the Ducks to move right in.

While much of the talk will surround the Auburn offense versus the Rebel defense, I am interested to see the other side of the matchup. Can the Tiger defense create some pressure on QB Bo Wallace, something they couldn’t do last week against South Carolina, in an effort to force him into some of the poor decisions that have plagued him throughout his time in Oxford.

Wayne Larrivee and Chris Doering will have the call from Autzen Stadium beginning at 7 PM ET. You can listen right here on WestwoodOneSports.com!