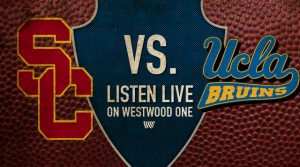 For a preview of the game, we turn to our analyst Chad Brown.

While it is a certainty that Oregon will win the Pac-12 North, the Pac-12 South race is going to go down to the wire. With five teams in the College Football Playoff Top 20 (UCLA #9, Arizona State #13, Arizona #15, Utah #17 and USC #19), it can be argued that the Pac-12 South is the toughest division in college football. Arizona, Arizona State, UCLA and USC are all tied with two conference loses. UCLA is the only team that controls its own destiny. Wins against USC and Stanford would put the Bruins into the Pac-12 Football Championship Game against the Ducks, but should the Bruins stumble, Arizona, Arizona State, USC and Utah are all waiting in the wings.

After last year’s game against USC, UCLA head coach Jim Mora shouted “we own this town!”. Well, if the Bruins win this Saturday, it will be only the third time in the storied history of this series that UCLA would have a three-game win streak against the Trojans. And the Bruins would “own” LA. But to get that done, they are going to need another big game from junior QB Brett Hundley. Last year against USC, Hundley was 18 of 27 for 208 yards and he added 80 yards on the ground with two touchdowns. Hundley’s ability to throw and run is a big reason the Bruins are first in the nation in red zone scoring percentage. Defensively UCLA is led by senior LB Eric Kendricks, a tackling machine, recording eight double-digit tackle games this season.

Talent is not the issue for the Trojans. Their first units are as talented as any in college football. Where the Trojans fall short is depth. With only 55 scholarship players and only playing about 45 guys a week, depth and the ability to finish games strong is where USC struggles. Junior QB Cody Kessler is ranked fourth in the nation in passing efficiency, completing 70% of his passes and throwing for 29 touchdowns. Nelson Agholor, the Trojans junior WR, is coming off back-to-back 200-yard receiving games and RB Javorius Allen has a 13-game streak of 100 or more total yards from scrimmage. DE Leonard Williams, a likely first-round pick in the coming NFL draft, leads the Pac-12’s second-ranked scoring defense.

As for the other game I’ll be eyeballing on Saturday, I’ll be looking closely at the #15 Arizona at #17 Utah matchup. It’s going to be a tough game for the young Arizona offense matching up against the Utes, who boast the nation’s leading pass rush. If Arizona’s freshman QB Anu Solomon can deal with the crowd noise and the pressure from Utah’s front seven, Arizona has a chance to get the road win.

John Sadak and Chad Brown will have the call from the Rose Bowl beginning at 7:30 PM ET. You can listen right here on WestwoodOneSports.com!