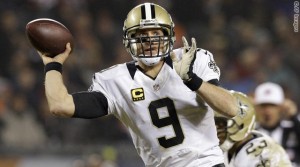 CHICAGO – Their record isn’t pretty but the New Orleans Saints are back on top of the NFC South after a 31-15 victory over the Chicago Bears at Soldier Field on Monday night.

Drew Brees led the way with 375 yards passing and three touchdowns as the Saints improved to 6-8 on the season. They sit a half-game ahead of the Carolina Panthers and a game in front of Atlanta. The Falcons visit the Superdome for a big matchup this Sunday.

Jay Cutler had two touchdowns and three interceptions for Chicago, which dropped to 5-9 on the year.