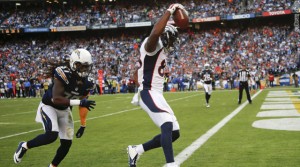 SAN DIEGO, CA – For the third time in Peyton Manning’s three seasons in Denver, the Broncos are the champions of the AFC West. Now they’ve got their eyes on a bigger prize.

Manning was just 14 of 20 for 233 yards and a touchdown, but it was enough as Denver improved to 11-3 and clinched the division. Connor Barth added five field goals for the Broncos.

Denver is tied with the New England Patriots for the best record in the AFC, but the Broncos would lose the tiebreaker to the Patriots based on their 43-21 loss to Tom Brady and company on November 2nd in Foxboro.

Dave Sims and Rod Woodson called the action on Westwood One.