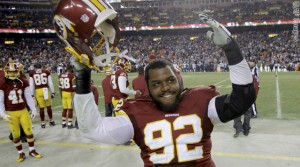 LANDOVER, MD – It’s been far from a good year for the Washington Redskins, but that won’t keep them from celebrating a 27-24 victory Saturday over the Philadelphia Eagles, denting the playoff hopes of one of their biggest rivals.

Kai Forbath’s 26-yard field goal with :05 left in the fourth quarter was the difference. Forbath was given the opportunity after the Redskins defense picked off Mark Sanchez as he was trying to drive the Eagles into position for a go-ahead score of their own.

Fullback Darrel Young had a pair of one-yard touchdown runs on his only two carries of the game as Washington improved to 4-11 on the year. Philadelphia dropped to 9-6 and will now need a ton of help to make the postseason. The Eagles will be eliminated from postseason contention tomorrow if Dallas beats Indianapolis.

Scott Graham and Mike Mayock called the action on Westwood One.

(The Redskins go in front on Alfred Morris’ TD run)

(A Darrel Young TD run puts Washington back up)