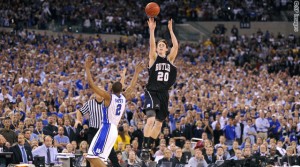 The comparisons between the 2010 Butler Bulldogs and the movie Hoosiers were understandable.

Butler plays its home games at Hinkle Fieldhouse, the historic Indianapolis basketball arena where the legend of Hickory High was born when Milan High School won the 1954 state championship. On an April night just down the road at Lucas Oil Stadium, Brad Stevens’ unheralded team found itself just a shot away from upsetting the mighty Duke Blue Devils.

Gordon Hayward’s half-court heave would rim out, but not before the Bulldogs had captured the nation’s attention with their historic run to the final.

Kevin Kugler has the story.

Westwood One gets you ready for the most exciting three weeks on the sports calender with Great Moments in Tournament History, as we look back on some of the most memorable teams and players in the tournament’s illustrious past.

13 February 2020 Comments are off for this post.
VILLANOVA, PA – Villanova held off Marquette en route to a 72-71 victory on Wednesday night. Markus Howard became the Big East’s all-time scorer in conference games, but it wasn’t enough as the Golden Eagles fell a point short. Tom McCarthy and Donny Marshall had the call on Westwood One.Read More »

12 February 2020 Comments are off for this post.
INDIANAPOLIS, IN – The Butler Bulldogs topped the Xavier Musketeers 66-61 in a battle of two teams fighting for position in the middle of the Big East standings. Butler star Kamar Baldwin had just 11 points but took over the game late as the Bulldogs held on to win. Jason…Read More »