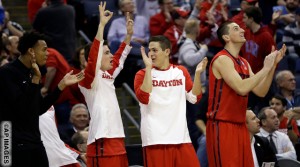 COLUMBUS, OH – We had to wait until the last of sixteen games on Friday’s second-round docket to get our first “upset” of the night, as the 11th-seeded Flyers held off the 6th-seeded Friars 66-53.

Archie Miller’s squad only had to make a short trip from Dayton–where they were able to play on their home-court when they outlasted Boise State in a First Four contest on Wednesday night–and the partisan crowd in red created another virtual home-game atmosphere.

For much of the second half, the Friars must have felt like they could not catch a break–epitomized by an incident during the under-4-minute media timeout, when head coach Ed Cooley threw down his chair to try to light a fire under his team.  Instead, he ignited the ire of nearby official, Terry Oglesby, who assessed a technical foul–interpreting the coach’s actions as an excessive display of frustration with the officiating.  Things only went south for Providence from there, as Dayton consolidated its lead with solid shooting and defense.

The Flyers move on to face 3rd-seeded Oklahoma in what promises to be a thrilling Third Round Match-up on Sunday.