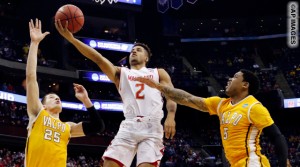 COLUMBUS, OH – 4th-seeded Maryland continued Friday’s theme of “chalk” surviving an upset by a double-digit seed in a tight contest, as they held on to defeat 13th-seeded Valparaiso 65-62.

Dez Wells extended the Terrapins’ lead to two possessions with a gritty three-point play with 1:44 to play.  Then an unlikely hero stepped up for the Terps on the defensive end, as little-used guard, Varun Ram–in his only minute of playing time–stripped the ball free from Keith Carter as the Crusdader was attempting a game-tying three-pointer in the game’s final seconds.

Sophomore forward Alec Peters carried the Crusaders with eighteen points on 4-of-7 shooting from behind the arc.

Maryland will next square off with their border-rivals, the 5th-seeded West Virginia Mountainers, in a third-round affair on Sunday.