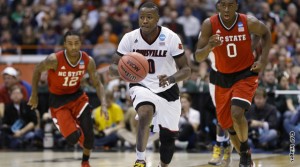 Under coach Rick Pitino, the Cardinals have reached the Elite Eight for the third time in five seasons.

NC State led 33-31 at halftime and pushed its lead to 6, 39-33, but a 16-2 spurt by the Cards put Louisville in command. Harrell and Rozier combined for 27 of Louisville’s 44 points in the second half. Rozier, a point guard, also contributed game highs of 14 rebounds and four assists.

Ian Eagle and P.J. Carlesimo called the action on Westwood One Sports.