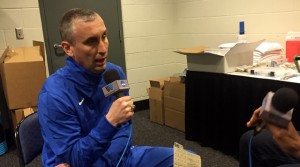 COLUMBUS, OH – Bobby Hurley returns to the NCAA tournament–this time as a head coach, riding his 12th-seeded Buffalo Bulls–champions of the Mid-American Conference–into Columbus to do battle with Bob Huggins’s 5th-seeded West Virginia Mountaineers.  Both teams muddled through early conference struggles before hitting their respective strides to play their best basketball down the stretch on their way to identical 23-9 records.

Hurley knows his team will need to keep their composure and protect the basketball against WVU’s high-octane full-court pressure if they want to “shake off” the Mountaineers and keep their 2014 NCAA Tournament campaign going.

Our own Dave Sims and Jim Jackson caught up with Buffalo Head Coach Bobby Hurley ahead of the game.