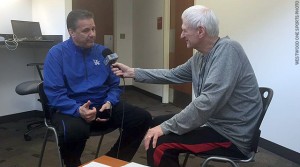 LOUISVILLE, KY – All eyes will be on Kentucky throughout this year’s NCAA Tournament as the Wildcats try to become the first team in nearly 40 years to go through an entire season without a loss.

First up for Kentucky is a matchup with Hampton, and while a 16 seed has never beaten a #1, the Wildcats say they aren’t taking the MEAC champions lightly.

Our own Bill Frieder caught up with head coach John Calipari ahead of the game.