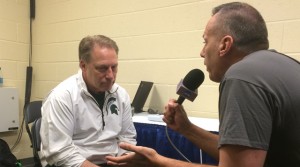 Charlotte, NC – He’d like to say he’s not, but it’s hard to deny that Tom Izzo is a tournament coach. After a midseason stretch that saw his Spartans on the outside of the dance looking in, a run to the Big Ten tournament final has Tom Izzo once again prepping for an NCAA tournament matchup.

They’ll face a Georgia squad who enters the tournament for the first time since 2011 led by coach Mark Fox.

Westwood One’s Kelly Tripucka caught up with Michigan State’s Tom Izzo ahead of the game.