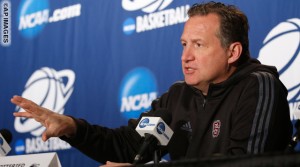 SYRACUSE, NY – Mark Gottfried knows that familiarity with an opponent is a double-edged sword.  His 8th-seeded Wolfpack squad gained a lot of confidence after beating its next opponent a month ago on the road, but he also recognizes how difficult it is to defeat the same team twice in one season.  They will face a big test on Friday when they go up against Rick Pitino’s 4th-seeded Louisville Cardinals with a spot in the East Regional Finals on the line.  NC State will need to find ways to score consistently against one of the stingiest defenses in the country if the Wolfpack are going to return to the Elite Eight for the first time since 1986.

Our own Ian Eagle caught up with Mark Gottfried ahead of the game.