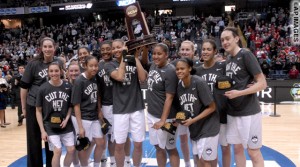 –  It wasn’t easy early, but after trailing by a point at the half, Connecticut was its usual dominant self in the second half, pulling away for a 91-70 victory over Dayton to advance to the Final Four for the eighth straight year.

The Huskies were led by a trio that all went for 20-plus points. Kaleena Mosqueda-Lewis topped all scorers with 27, while Breanna Stewart and Morgan Tuck added 23 apiece.

The seventh-seeded Flyers had given top-ranked UConn, which had won its first three tournament games by an average of 47 points, all it could handle before the half, taking a 44-43 lead to the locker room. But the Huskies, who hadn’t trailed at halftime in two seasons, responded by scoring the first nine points after the break and never looked back.

John Sadak and Swin Cash called the action on Westwood One Sports.