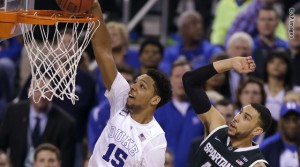 Duke’s balanced scoring overtook an early Spartan lead and the Blue Devils were never challenged. Michigan State led 14-6 out of the gate, but after Okafor’s dunk with 9:38 remaining in the first half, Duke never trailed and led by as many as 20 three times.

Spartan forward Denzel Valentine scored five 3-pointers and 22 points in a losing effort as Duke advanced to the national championship game for the 11th time, the ninth under Mike Krzyzewski.

Kevin Kugler and Clark Kellogg called the action on Westwood One Sports.