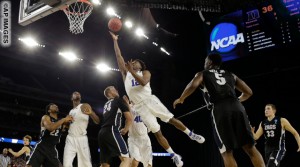 INDIANAPOLIS – Jahlil Okafor was huge for Duke throughout the season, but the breakout star of the NCAA Tournament thus far has been Justise Winslow, who dominated in the Blue Devils’ two victories in Houston last weekend – which just happens to be Winslow’s hometown.

Next up for Duke: a matchup with another tournament surprise — the 7th-seeded Michigan State Spartans.

Ahead of the game, our Jason Horowitz caught up with Justise.