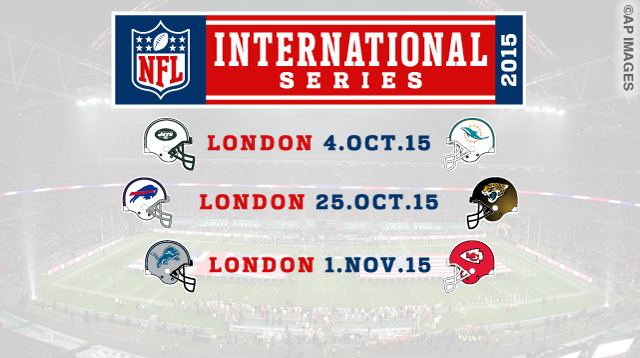 NEW YORK, NY – Westwood One Sports has just added the NFL’s three International Series games to our lineup for the 2015-16 season, marking the third straight year we’ll bring you an NFL quadrupleheader — but this time we’re going big and bringing you THREE.

The International Series games will begin at 9 AM Eastern on October 4th when the New York Jets meet the Miami Dolphins, on October 25th when the Buffalo Bills face the Jacksonville Jaguars and on November 1st when it’s the Detroit Lions taking on the Kansas City Chiefs. Each International Series broadcast will serve as a lead-in to our Sunday afternoon doubleheader and Sunday Night Football broadcasts, marking an unprecedented three-pack of NFL quadrupleheaders.

In Week 5 of the 2013 season, a scheduling conflict between the Oakland A’s and Oakland Raiders forced a late-night start at the O.co Coliseum and we brought listeners that game following our normal Sunday afternoon doubleheader and Sunday Night Football.