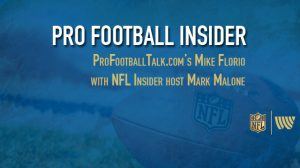 This time around, Mark and Mike talk about the porous offensive line of the Seattle Seahawks, the new regime in Miami as Joe Philbin was fired and much more – including this week’s owners meetings and what we know about the Rams, Chargers and Raiders making plans for a move to Los Angeles.

(Listen to Mike Florio and Mark Malone ahead of Week 5)