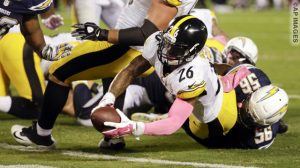 Bell’s run out of the wildcat formation capped a 12-play, 80-yard drive that took up the final 2:56 of the game. It followed Josh Lambo’s 54-yard field goal that gave the Chargers a three-point lead.

With the victory, Pittsburgh improves to 3-2 on the season while San Diego dropped to 2-3. Both teams are looking up at 5-0 leaders in their respective divisions, with Cincinnati and Denver setting the pace in the AFC North and AFC West respectively.