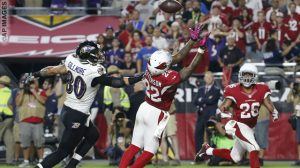 GLENDALE, AZ – Cardon Palmer had a pair of touchdown passes as the Arizona Cardinals improved to 5-2 on the season with a 26-18 victory over the Baltimore Ravens on Monday night.

Chris Johnson also had a big game for the Cardinals with 122 yards rushing and a score, but it was the Arizona defense that came up big in the final seconds to secure the win once and for all.

With Baltimore driving, Tony Jefferson intercepted a Joe Flacco pass in the end zone to seal the victory. Baltimore dropped to 1-6 with the loss.

Kevin Kugler and Kurt Warner called the action on Westwood One.