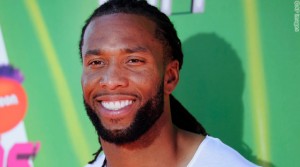 Larry Fitzgerald and the Arizona Cardinals were struggling on Sunday, but finished the game with 24 unanswered points to beat the Cleveland Browns 34-20.

In his weekly conversation with Westwood One’s Jim Gray, Larry talks about what was said at halftime to turn things around for his team, the breaking news of Vernon Davis being traded from the 49ers to the Broncos and much more, including his newfound appreciation for peas.