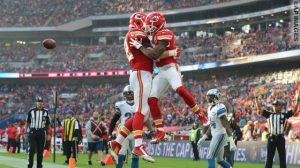 LONDON, ENGLAND – Alex Smith had a pair of touchdown passes and a touchdown run as the Kansas City Chiefs beat the Detroit Lions 45-10 at Wembley Stadium in the final NFL International Series game of 2015.

Smith was efficient in the passing game, but it was the Kansas City ground attack that led the way. Charcandrick West had 97 yards and a score and the team racked up 206 yards on 32 carries.

Tom McCarthy and Derek Rackley called the action on Westwood One.