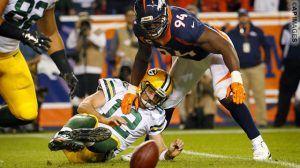 DENVER – In a battle of unbeaten teams featuring a pair of marquee quarterbacks, it was the Denver defense that shined brightest in a 29-10 Broncos win over the Green Bay Packers on Sunday night.

The Broncos held Aaron Rodgers to just 77 yards passing and sacked the Packers’ star quarterback three times, including one that led to a safety in the fourth quarter to put the icing on an impressive victory.

Peyton Manning was also at his best, completing 21 of 29 passes for 340 yards in the game. Ronnie Hillman had a pair of touchdown runs and C.J. Anderson added another.

Kevin Kugler and James Lofton called the action on Westwood One.