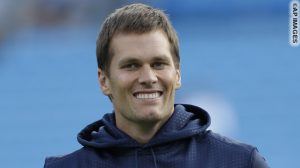 Tom Brady will be able to sit back and watch two of the opponents he sees most often go head to head on Thursday Night Football tonight as the New York Jets host the Buffalo Bills.

In his latest conversation with Westwood One’s Jim Gray, Tom talks about keeping an eye on his AFC East foes, getting set for a game this weekend against the New York Giants and much more, including Boston legend Larry Bird coming out this week in support of what Tom went through with the Deflategate investigation over the past year.