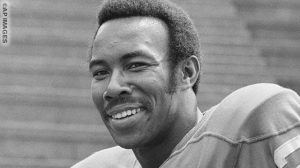 Few professional football players have a resume quite like Lem Barney’s.

The Mississippi native spent 11 seasons with the Detroit Lions, intercepting 56 passes and earning seven Pro Bowl selections. His time in Detroit from 1967-1977 also led him to one of the oddest credits you’ll ever see – backup vocals on Marvin Gaye’s seminal hit, “What’s Going On.”

On the field, the Hall of Famer made an impact from his very first play, when he intercepted a pass and took it back for a touchdown.

For more on the history of the game, visit the Pro Football Hall of Fame in Canton, Ohio, or online at ProFootballHOF.com.