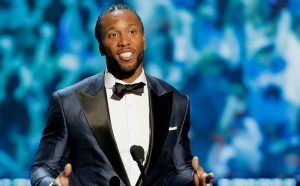 Sunday was far from a typical day around the NFL, with players and owners responding to President Trump’s Friday comments about national anthem protests with increased demonstrations. Some players chose to link arms in unity, while many dozens more took a knee. Several teams remained in their locker rooms during the anthem.

In his weekly conversation with Westwood One’s Jim Gray, Larry talks about what happened yesterday, his plans for tonight’s game in Arizona and answers the question of whether he would meet with the president if given the opportunity.