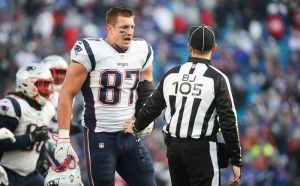 The New England Patriots improved to 10-2 on Sunday, but the victory didn’t come without issues. Rob Gronkowski was suspended for a game on Monday for a cheap shot on Bills cornerback Tre’Davious White.

In his weekly conversation with Westwood One’s Jim Gray, Patriots quarterback Tom Brady gives his thoughts on the suspension. He also talks about his sideline shouting match with offensive coordinator Josh McDaniels and much more – including his reaction to the latest developments with Eli Manning and the Giants.