Boomer Esiason, one of the most respected and accomplished voices in sports media, has decided not to return as color analyst for Westwood One’s NFL broadcasts after 18 years in the Monday Night Football booth.

“It has been an honor to be a member of the Westwood One NFL broadcast team for the last 18 years,” said Esiason. “I am proud to have delivered the calls for some of the most iconic Monday Night and Super Bowl moments in the history of the NFL. With my continuing busy schedule during the NFL season, including my daily NYC-based morning drive radio show, ‘The NFL Today’ and ‘Inside the NFL’, I thought the timing was right for me to step away. I would like to thank my broadcast partners in the booth who have made the job enjoyable and fulfilling.  Also, I would like to thank Westwood One’s senior management and sales force, who, over the years, were instrumental in providing on-air support for the Boomer Esiason Foundation.”

Esiason also currently serves as a lead studio analyst for CBS television’s pregame, halftime and post-game program, “The NFL Today,” and co-host on WFAN radio’s highly acclaimed weekday morning program, “Morning Show with Boomer and Gio”. He is also is a member of Showtime’s “Inside the NFL” team.

“Boomer has been the constant for a generation of Monday Night Football listeners, and we can’t thank him enough for his nearly two decades of service to Westwood One,” said Howard Deneroff, EVP/Executive Producer, Westwood One Sports. “He has been the ultimate professional, a terrific broadcaster, and a great teammate to all of us who have had the good fortune of working with him.”

Before gaining his stellar reputation as a broadcaster, the 14-year NFL veteran played for the Cincinnati Bengals, New York Jets, and Arizona Cardinals. The four-time Pro Bowl quarterback was named the NFL’s Most Valuable Player in 1988 and led the Cincinnati Bengals to Super Bowl XXIII (1989). Sporting News and Football Digest also named Esiason NFL Player of the Year that same season.

In 1995, the NFL honored him with the Walter Payton Man of the Year Award for his excellence on the football field as well as his charitable work through his Foundation. 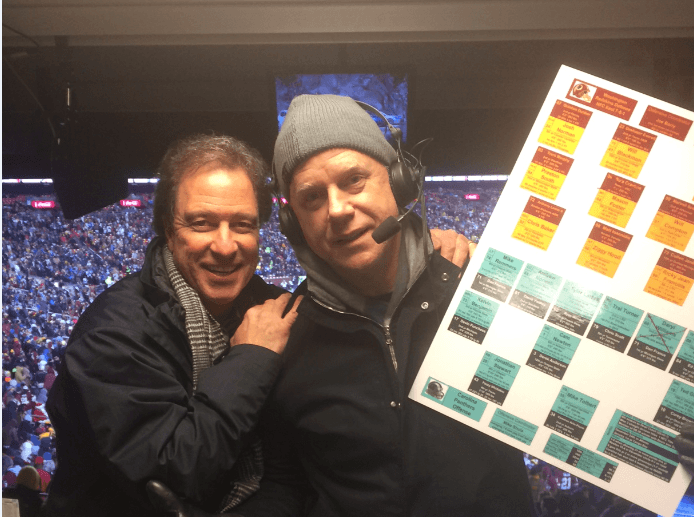 Kevin Harlan and Boomer Esiason pose for a photo before a Monday Night Football game between the Washington Redskins and the Carolina Panthers.

20 January 2020 Comments are off for this post.
SANTA CLARA, CA – Raheem Mostert rushed for four touchdowns as the San Francisco 49ers dominated the Green Bay Packers in the NFC Championship Game. San Francisco led 27-0 at halftime and cruised to a 37-20 win to set up a matchup with the Kansas City Chiefs in Super Bowl…Read More »