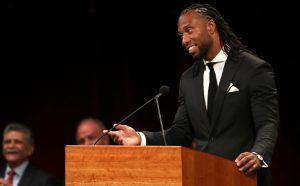 Larry Fitzgerald has become famous for his off-season travels to far-off countries to experience new cultures, but perhaps his greatest feat this offseason was delivering a eulogy last week at the memorial service for the Senator John McCain.

In his weekly conversation with Westwood One’s Jim Gray, Larry talks about his friendship with the late senator, leaving the door open to continue playing beyond this season and much more.