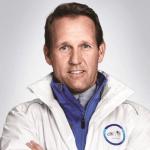 Dan Jansen joins the Westwood One crew for the PyeongChang 2018 Olympic Winter Games as our speed skating analyst.

Hours before his first race at the 1988 Winter Olympics (where he was a favorite), Jansen’s sister passed away after a long battle with leukemia. As a tribute to her and her last words which were urging him to victory, he was determined to win that day. While competing, he fell not once, but twice.

He continued to train, determined to win an Olympic gold, but failed to reach the podium during the 1992 Olympics.

It wasn’t until his last race during the 1994 Olympics that he finally won gold. Jansen forever inspired fans by embodying the competitive spirit, and inspired fans to reach for their own personal “gold”.

In 1988, he was invited to the White House by President Reagan, who, along with the U.S. Olympic Committee, honored him with the Olympic Spirit Award.