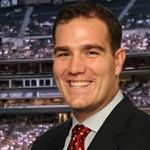 Ross Tucker serves as a sideline reporter for Westwood One and has been with the network since 2014.

Tucker is the host of the popular Ross Tucker Football Podcast, which you can listen to right here on WestwoodOneSports.com. A new episode is posted every weekday during the NFL season. CLICK HERE for the latest episode.

Ross also hosts a show on SiriusXM NFL Radio and is a contributor to Pro Football Talk on the NBC Sports Network.

Tucker graduated from Princeton in 2001 before embarking on a successful career in the NFL. In March of 2008, Ross retired from the National Football League after a seven-year career as an offensive lineman with the Redskins, Cowboys, Bills, Patriots and Browns.